This is the term given to the damage of the retina in diabetic patients. The tiny blood vessels in the retina known as the capillaries, become damaged which is caused by high blood sugar levels. 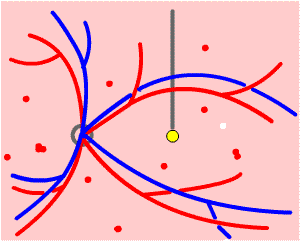 In the early stages of Diabetic Retinopathy the effects are usually unnoticeable until the condition becomes more advanced, at which stage significant damage is caused to the eyes. You may notice your vision becoming worse, e.g blurred, patchy, you may notice floaters and in some cases you may have a sudden loss of your vision.

In the UK, nearly every person with diabetes should have yearly photos taken.The photographs are examined by the optometrist or photographer, and patients with significant damage are referred to hospital clinics. Your pupils have to be dilated for this examination, and you are often advised not to drive until the pupils have returned to their normal size. A doctor or optometrist may see ‘dots’ and ‘blots’. The dots are some capillaries that have enlarged and the blots are tiny spots of blood on the surface of the retina.

What does it mean if you have ‘background retinopathy’?

The number of the little red dots the doctor sees (also known as microaneurysms), indicate the likelihood of more severe problems in the years to come. As the damage is mild at this stage, your sight will be nearly perfect, however, the condition does progress.

If your diabetes and blood pressure are well controlled, and have been all the time you have had diabetes, changes should be very slow. Unfortunately for many people with diabetes the retinal damage increases, and maculopathy or proliferative retinopathy develop over a few years.
Background retinopathy generally means your diabetes is not controlled as well as it might be. If you have been diabetic 30 years, even with the best control, these may develop. 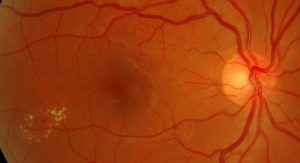 Founded in 1973, The Specialist Contact Lens Practice was one of the first of It’s kind. Providing specialist eye health solutions and bespoke contact lenses to even the most complex of prescriptions.